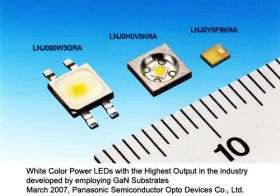 Panasonic today announced that it has developed a blue LED element by employing GaN substrates for the first time in the industry.


From middle of March 2007, the company will mass-produce a white high-power LED series using these elements. Use of a GaN substrates, which has very high thermal and electrical conductivity, substantially improves the performance of this LED in the high current area, and achieves the industry's top-level output. The emitted light wavelength is 460 nm, the total radiation flux 355 mW at a forward current of 350 mA, with an external quantum efficiency of 38%.

Its marked crystal stability gives it high reliability as a device, and since the substrates and light-emitting layer have the same refractive index, the result is light delivery efficiency over 1.5 times that of the conventional company sapphire-based LED element.

The blue LED element covered with a uniform fluorescent layer results in a compact white high-power LED with little color variation. Application of this technology is likely to bring forward the development of new applications, such as LED-based lighting and camera flashes.

An LED produced on a sapphire substrates based on current primary technology suffers problems with light emission efficiency due to the difference in refractive index between the substrates and the light-emitting layer. Poor heat dissipation properties tend to result in saturation of output at high currents. The conventional fluorescence application process generates unevenness in the white color, and the large volume of the white light-emitting body limits the optical design possibilities of the lens.

For more information, please visit our website:www.qualitymaterial.net,send us email at: angel.ye@powerwaywafer.com or powerwaymaterial@gmail.com。
Posted by powerway wafer_Powerway Wafer Co., Limited at 11:57 PM